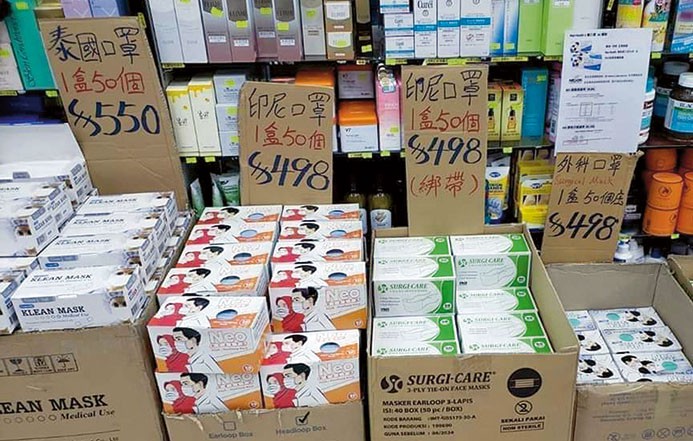 “Individual precaution does not scale to collective precaution…. Hence one must panic individually in order to avoid systemic problems.”

When SARS happened, we had a very limited view of what other parts of the world thought. After all, in 2003, the popular smartphones were candy bar phones from Nokia and the only place to digitally broadcast our mundane personal mumblings was … Friendster.

This time it is different.

The most educational thing during this current coronavirus scare was how different we in Hong Kong react to this threat versus other parts of the world. We in Hong Kong panicked. Almost everyone is wearing masks at all times (those who are not wearing it are mainly caucasian …). We are hoarding everything.

Listening to the media in other parts of the world, I was surprised by how obsessed they were with averages and data, from fatality rates to R0s to the Spanish flu. They cared deeply about “knowing the facts” and so-called rationality. The only fact we learned from SARS was when a new virus was manifesting, there’s only data and no facts. Trying to gather “facts” while the virus was blowing up was like trying to measure the top speed of a race car in the midst of acceleration.

Premature data could lead us to miss the uncertainty and significance of variances in statistical averages. For instance, the global fatality rate of SARS was 9%. Yet, for Hong Kong, it was 17%. Had we reacted solely on the global fatality rates, we probably would have ended with a lot more deaths. Variances were dynamic and dramatic, and the potential consequences were catastrophic.

In the most simplistic term:

One of the reasons why Hong Kong suffered during SARS was how rapidly the virus transmitted and then overwhelmed and compromised our medical systems. In fact, 17% of HK’s infected SARS cases was medical staff. The sudden rise of suspected cases sent people panicking and many stormed the hospitals. This was a new virus, and the symptoms were very non-descriptive (fever, coughs …) and there were no effective screening tests and no known cure/vaccine. Furthermore, our understanding of its incubation period and mode of transmission was severely incomplete. As a result cases took long to diagnose, treatments were experimented on the fly, hospitalization periods were long. Queues at hospitals backed up, medical staff started to get sick, medical supplies started to run short, hospitals ran out of space … It spiralled really really fast.

That’s why we realised we knew nothing- No statistics, studies, trends, data, so-called facts, saved us from surprises after surprises:

1) In the beginning of SARS, we were told perhaps the virus could not spread person-to-person. It was believed that we should only avoid live-stock and animals, similar to what we have learned from the bird flu. “Handshakes and hugs are okay.” We were assured.

🙅🏻‍♂️
We didn’t appreciate the wrath of the term “bio-aerosol,” that viruses liked to hitch a hike on aerosols, that having hotpot in a small room was a clusterfuck of flying aerosols. We also didn’t realize how horrifying sneezes actually were.

2) We were told the likelihood of transmission from contaminated surfaces was low.

🙅🏻‍♂️
We didn’t know the virus could stay alive for days on surfaces (up to 9, per some studies.) So any door handles, elevator buttons, high-fives, stools at Starbucks, everything, became new villains, and that it was impossible to wash our hands enough to combat everything that we would inevitably touch. (Hence our passion for luxuriously applying sanitisers on everything.)

3) We then thought, oh well, we should just stay home, and we would be okay.

🙅🏻‍♂️
In March of 2003, in a matter of 8 days, 190 cases were reported from one single apartment block in a busy residential area. We realised we didn’t know the virus could get to us through poop, air vents, and toilet pipes. It was then discovered that our bathrooms could be filled with SARS-Ridden-aerosols, brought to us by our neighbours who were battling diarrhoea in their own toilets. We learned it didn’t matter if we had ventilation fans on. Many of us subsequently became experts on how U-shape toilet pipes functioned and maintained. Oh, we also added another new phrase to Hong Kong’s collective dictionary- “fecal– oral.”

4) We were told face masks wouldn’t protect us from getting infected, that they were only useful in preventing the spread of the virus. So if you weren’t sick, no need to wear it.

🤷🏻‍♂️
The advice itself was not wrong, but turned out we might not know when we were sick and contagious. We didn’t realise an infected person could be contagious even during incubation. We also didn’t realise how long the incubation period could be (14 days, some said more.) Great. We could all be walking around, talking, spitting a little, spreading the virus.

Coming back to today, the same happened in Wuhan at the onset of COVID-19. The dramatic influx of suspected cases brought the hospitals to their knees within days- Wait-time at the check-in lines were days long, people had to sleep in corridors, doctors ran out of masks, medical staff fell sick, while more and more people swamped the hospitals. That’s why the numbers in Wuhan have been significant worse than other places.

Many contrasted SARS and COVID-19 with the stats of the common flu and reasoned, “The fatality rate of this has only been 2%! Even if 3 million people get infected, the total number of deaths would be 60,000. Influenza kills 60,000 people every year! Don’t panic!” Well, our medical systems would completely collapse if there’s indeed 3 million people infected with a new virus like the COVID-19, the death rates will be a lot higher than 2%, because we have no effective screening tests, vaccine, or just basic understanding of how it behaves.

So, what am I saying so far?

During SARS in Hong Kong and COVID-19 in China/Wuhan, there were more INFECTED than that the hospitals could treat, which in turn further slowed down the rate of TREATED, and led to higher death rates.

That was just the beginning: Compromised hospitals slowed down the ability to screen incoming cases, which led to more transmission because people didn’t know they were sick, which further increased the number of INFECTED cases, and eventually crumbled the medical systems further, and increased death rates.

Eventually, what we have learned:

Hence, the only truly sensible thing to do was:

To wrap up, Nassim Taleb has been asking us to be very cautious. One thing he said summed everything up potently:

“Individual precaution does not scale to collective precaution…. Hence one must panic individually in order to avoid systemic problems.”