“… BEIJING — Michael Phelps was in trouble.

Churning desperately to the wall in the 100-meter butterfly Saturday, chasing Milorad Cavic and an historic seventh gold medal in these Olympics, Phelps was in that worst of all places for a butterflyer approaching the finish: 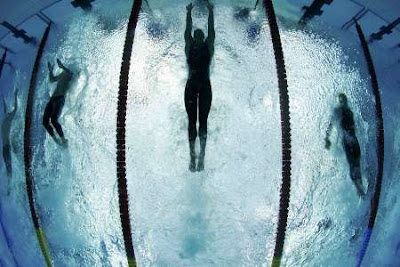 (Phelps is on the left…)

His strokes had not timed out in this most rhythmic of all swimming disciplines, and now Phelps was left with two bad alternatives.

He could ride his last full stroke to the wall — gliding in.

Or he could recoil and throw his arms forward one more time — chopping the wall, as they say in swimming.

Either way, you usually lose an airtight butterfly race with a mistimed finish….”

so what did he do?

He made the right choice, somehow manufacturing a “short, fast stroke” to the wall. Cavic was no more than a foot from touching when Phelps still had his hands in the water. His recovery and reach were frantically fast.

Cavic stretched out, fully extended, hands grazing the wall below the water’s surface. Phelps hammered the wall at water’s edge. Those high-low butterfly finishes are the hardest for fans to judge — and the judgment in the Cube was nearly universal….” 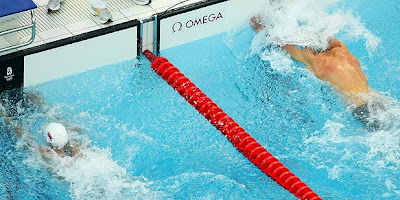 (Phelps on the right. Notice the splash – his half-“chop”)

He did it again. He has 7 gold medals now. oh, also 6 world records. Oh, and two probably most talked about drama from this Olympics. Man. You deserve your PE, Phelps! 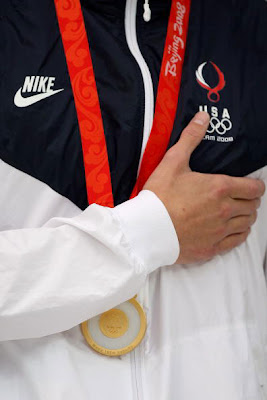