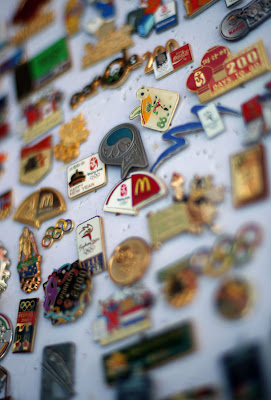 Nicole and I were sitting near the aisle. Next to us were two retired Americans. They were … retired, and had the size of retired people … so during half time, they asked if we would like to exchange seats with them, because they needed more leg room (no we were in the stadium, not on a plane). Of course we were fine, because their seats were actually more towards the middle of the stadium. Then we saw two volunteers rushed up the stairs, and pulled out a bunch of pins. These two Americans then pulled tonnes of pins. They were pin traders! It was so much fun.

In the middle of the trade, the man said “So you want this swoosh? you can take this one, but not this red one.” Hee hee, nike swoosh pins are popular.

Then right before the game started, the man came over to us, and gave Nicole and I each a USA Olympics PIN!!!!!!