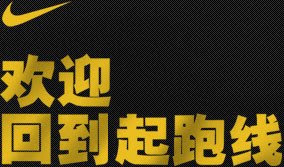 Today we had our season kick off meeting. As expected, the majority of the meeting was about the Olympics. It was great to listen to our leadership team to recap on what we have done. Most interesting of all, it was great to hear her narrating the thought process and the plans behind the things we did.

I am very proud of the team. We didn’t throw money at the sponsorship, and we used the money wisely. I don’t know how I would feel if I were to sit in the post Olympics recap meetings of other brands. I think it would probably be very similar … i.e. … they all did great and it was a win. But to me, I think we were special.

Our goal, from the gitgo (back in 2001!!!), was simple. Serve the athletes. This is the journey of the athletes, and we believe we would be able to connect to our consumers most directly through athletes, because what is the Olympics about? The athletes and Sport.

Let’s see, out of the 1000 hours that the Olympics were broadcasted through CCTV in China, Nike was in 700+ hours. This is because we had 21 Chinese federations. Lining was the next closest, because it has the medal winning federations. That’s where we invested. The federations, the innovations needed to help these athletes from 21 federations to perform better.

We had about 10 TV/Print/OOH ads that were designed to follow the athletes’ journey throughout the Olympics (liu xiang is a prime example of that. but we had a few more that more hkers wouldn’t be able to see). In comparison, Adidas only had 1 version of its commercial, and as for prints and ooh, they only had variations of the original version. Lining, Anta and 361 all only had one version. That means if you were following the games on TV, you would see the same ad from the other brands. However, you would also see Nike ads that talked about the emotions and journeys of the athletes that performed yesterday, or the day before. You would find ads that resonate your feelings towards the games. Similarly as you woke up every morning, as you got onto the bus/cab/walk to work, as your bus passed by the big bill board in Shanghai, as you were thinking about Liu Xiang’s historic withdrawal, the ad would tell you, “Love sport even when it breaks your heart”.

Apart from what the ads were trying to follow the athletes’ journeys, we did changeouts at retail as well. So as you walk into a store, you would immediately find relevant products that you could own ($$) to share these gold moments.

Oh, we did a medal tally too. I can’t remember exactly what we had, but the ttl Nike China medal count was around 47. I think we had around 18 gold medals. Adidas has 3 gold medals, and 5 medals in total. Of course, we didn’t put Lining in the powerpoint. They would have been the winner for sure. 🙂

The other goal was about innovation. I don’t need to talk about this too much here. Flywire, lunarfoam, burnout mesh, the different innovations for the 21 different sport …. but I don’t think this would be possible had our focus been placed somewhere else other than on our athletes. They are our best ambassadors, period. Kobe wore our Hyperdunks on his road to redemption … that’s Kobe, not chow pak ho! 🙂 (oh a side note though, I think what speedo managed to pull off with its LZR suit was actually more impressive. I read an article about it and truly this was the single most ground breaking technology in this Olympics, not the flywire, sorry.)

I don’t know about you, but I am truly impressed. When I was young (back in 1992), my friends and I were watching the NBA finals. Michael Jordan was playing against Clyde Drexler. Jordan was on fire. He was raining down three pointers, and he told the world “Clyde Who?” through his performance. After the game, we were all so excited, and ran to the courts to ball. We all felt we could do the same. We were so inspired.

So this is what we did/are going to do:
Basketball tournments were organized right before the game for kids to compete. They had to win in their own cities first, and then the final was held in Shanghai, where CP, Melo, Lebron and Kobe came to watch

A human race (10K run) in the end of August to encourage people to participate. The participation rate? 20000 runners in China alone (the target is to have 1million runners around the world).

More basketball games in the holiday season for kids to play in.

We inspired kids through our athletes, through sport, through the Olympics, and now it is time to provide them with a venue and the support where they could achieve their dreams.

I really admire our marketing team. I just can’t understand comprehend imagine how they came up with all these. Perhaps this explains why I am a sales person.

Oh, and we did yet another ad.