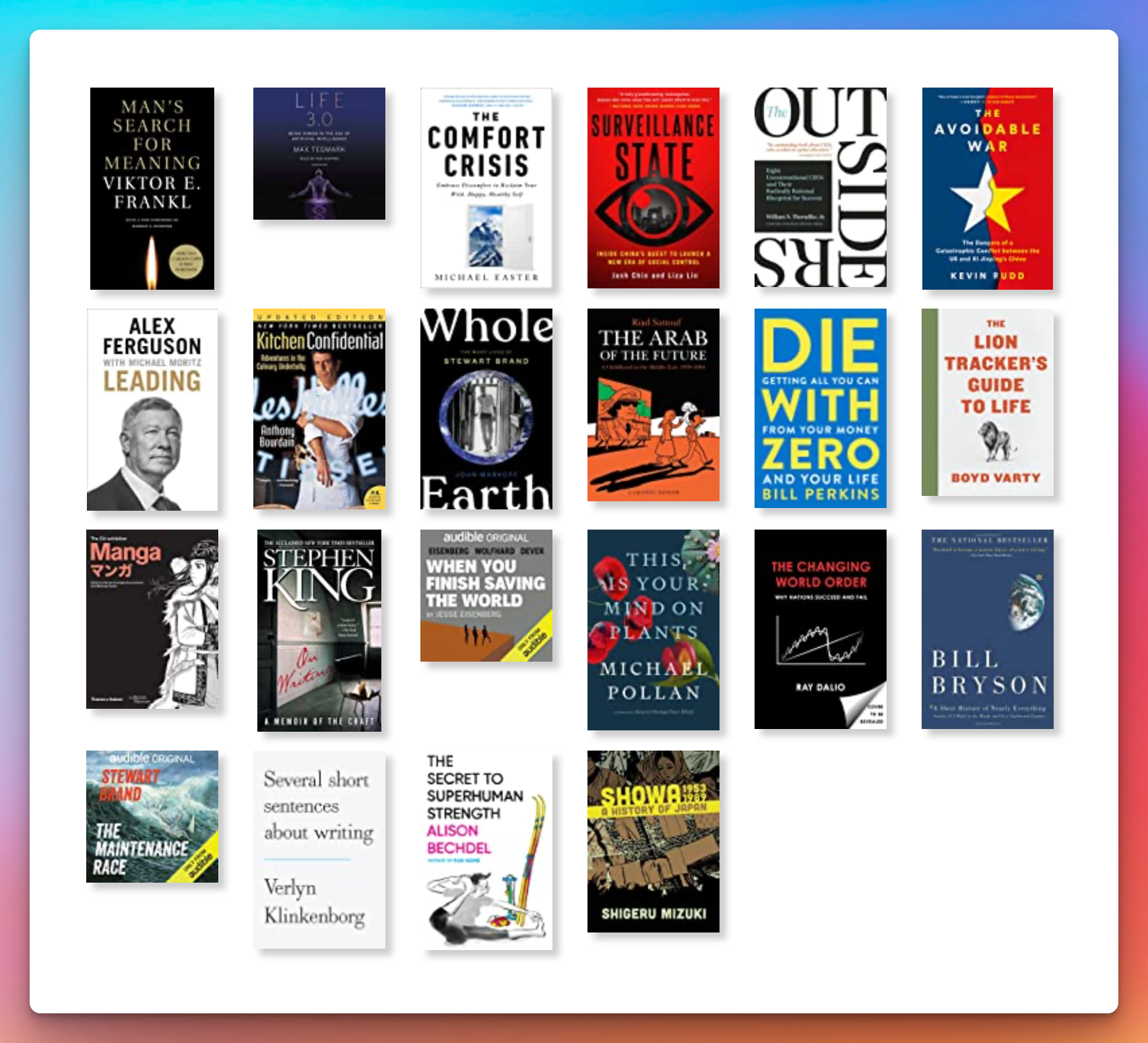 BOOK OF THE YEAR:

Whole Earth: The Many Lives of Stewart Brand by John Markoff

LESSONS OF THE YEAR:

Your life is insignificant and you are stuck with it. So don’t take yourself too seriously, be okay with what happens, do hard things because hard things tend to make you less bored, and slurp your noodles loudly.

A Short History of Nearly Everything. Bill Bryson
We are so infinitesimal and so utterly insignificant. You really don’t matter and I don’t either.

At the same time, it is extraordinary that we exist. So let’s bask ourselves in this paradoxical awe and make the best out of it. 🌌

The Changing World Order: Why Nations Succeed and Fail. Ray Dalio
Gosh I dislike the way he writes. But his points and analysis were insightful. And my takeaway is, the bad news is that shit is going to hit the fan soon. The good news? As a species we have all been there before. The worst that can happen is we suffer and die bigly. The even better news? Suffering and dying bigly is also something we as a species have all been there before.

Surveillance State: China’s Quest to Launch a New Era of Social Control. Josh Chin
China is watching everyone. All other countries are also trying to watch everyone. China is doing it better, while other countries are trying to keep up. My takeaway is, anyone would surveil their citizens as much as they could, and everyone would abuse it. The only protection we can hope for is a rule of law, watchdogs, checks and balances, and maybe democracy.

The Avoidable War: The Dangers of a Catastrophic Conflict between the US and Xi Jinping’s China. Kevin Rudd
This is a worthwhile book to read because the author, Kevin Rudd, former Prime Minister of Australia, actually tried to give a point of view. His viewpoints deserved consideration because he studied and lived in China, and has interacted with the Chinese at the geopolitical arena, and as a person of real power. He used his experiences to offer a version of a future where China and the US could fight without world war III.

My takeaway is, for the sake of humanity, powerful grown-ups, such as world leaders, like little kids, need guardrails too.

Life 3.0: Being Human in the Age of Artificial Intelligence. Max Tegmark
It’s a great book about why we ought to talk about how to set up AI. AI is happening so quickly that we are already playing catch up. Although this will not be the first time we misjudge the impact of our own inventions (think nuclear bombs, plastic bags, infinite social media scrolls), AI is a bit different. The book documented how AI has already kicked our arses and investigated the many ways of how AI could destroy us. Yay.

Leading: Learning from Life and My Years at Manchester United. Alex Ferguson
His leadership lessons were dull, but his stories as a football coach were colorful. It was interesting to be reminded that world class kickass athletes are just like a nobody like me. They got all worked up by mundane meaningless shit, such as who stood in the front of a queue and who got the biggest closet in the locker room.

Whole Earth: The Many Lives of Stewart Brand. John Markoff
I knew little about the counter-culture in the US in the 60s. Steward Brand’s story gave me a look into that turbulent, hopeful, and magical period. He demonstrated a zestful mind, the ability to build and sustain world altering movements, and the unrelenting determination to answer questions. He also reminded me of the inevitable desire we all have to search for meaning and figure out answers, no matter how accomplished we are, no matter at what age.

Kitchen Confidential: Adventures in the Culinary Underbelly. Anthony Bourdain
It is impossible to not psychoanalyze his stories, given what has happened to him. I couldn’t stop thinking, what a poor tortured soul. He never found peace. My heart ached. My takeaway is, “drive” is often bottomless dissatisfaction in disguise. Be mindful.

The Lion Tracker’s Guide to Life. Boyd Varty
The book convinced me that we all would behave and feel dramatically better if we spend a lot more time in the wilderness. The effect will be exponentially more dramatic if there were wild animals involved.

Die with Zero: Getting All You Can from Your Money and Your Life. Bill Perkins
Don’t leave any money behind. Try your best to make the best use of them soon. I get the idea, but I don’t know if I feel more confident about getting there before I die.

Man’s Search for Meaning. Viktor Frankl
I enjoyed the part about logotherapy the most. No one can not take his views on therapy seriously, given what he had gone through in the concentration camps.

The Comfort Crisis: Embrace Discomfort to Reclaim Your Wild, Happy, Healthy Self. Michael Easter
If you already know how bad processed food, sugar, sitting, staying indoor, etc., are, you may skip this book. The only new thing I learned from this book was the effectiveness of hiking with weights. But I could have learned that in 3 pages.

This Is Your Mind on Plants. Michael Pollan
I stopped drinking for a few days after reading his book, just to feel the effect. My takeaway is, don’t. Just read about it in the book.

The Maintenance Race. Stewart Brand
A short story about ships racing around the world. It’s short and fantastic. My takeaway? Treat the skill of maintaining seriously. It’s a craft that worths honing.

Manga マンガNicole Coolidge Rousmaniere
It’s always fun to learn more about the artform and its artists.

The Secret to Superhuman Strength. Alison Bechdel
This is a great example of how to use comics to conquer grand “meaning of life” kind of questions.

The “Showa A History of Japan” Series. Shigeru Mizuki
This is a great example of how to use comics to conquer history.

The Arab of the Future: A Childhood in the Middle East, 1978-1984. Riad Sattouf
This is a comic book of a bi-racial kid growing up in the Middle East. It was a mesmerzing journey into a world that I knew nothing about. The scene of how kids brutalized a puppy was comical, cute, and absolutely gut wrenching.

The Outsiders: Eight Unconventional CEOs and Their Radically Rational Blueprint for Success. William Thorndike Jr.
A list of very successful companies that most didn’t know much about, because their bosses were operationally excellent, disciplined, and utterly unsexy. It’s a worthwhile read because it is important to be reminded that it is totally okay to be like a boring ruthless machine. You don’t have to put a dent in the universe and change humanity in order to become successful and rich.

Bittersweet: How Sorrow and Longing Make Us Whole. Susan Cain
I really looked forward to her second book but I quickly realized I didn’t need to be reminded of something that I confront with daily.

Imaginable: How to see the future coming and be ready for anything. Jane McGonigal
I listened to it and realized I had to go through the exercises in the book in order to complete the experience. I am getting the paperback when it comes out.

A Beginner’s Guide to the End: Practical Advice for Living Life and Facing Death. B.J. Miller
I wanted to read this book because folks who recommended this book said they wished they read this book before they had to confront with death. I guess this is just the way this works- you can only deal with death when it confronts you.

The True Believer: Thoughts on the Nature of Mass Movements. Eric Hoffer
It’s an important topic of how we fall prey to cults and mass movements. I lost interest quickly. Maybe I need to start a cult so I have more skin in the game to get better at the craft of converting sheep.